"Pterodactyl" seen by the artist at Guantanamo Bay, Cuba, in 1971


How common is a long tail on a modern pterosaur! Of the 128 more-credible sighting reports compiled at the end of 2012, 41% reported a long tail. That's a lot, considering some eyewitnesses concentrate on the head or wings and don't remember for sure if there was a long tail. Also significant is how few report the absence of a long tail: only 2%. That makes a 20-to-1 ratio in favor of long tails.

The Rhamphorhynchoidea is one of two suborders of pterosaurs, known by paleontologists from fossils. The other is the Pterodactyloidea, which generally had shorter tails and a different head orientation. But in reality both types are known not just from fossils but from human eyewitnesses. 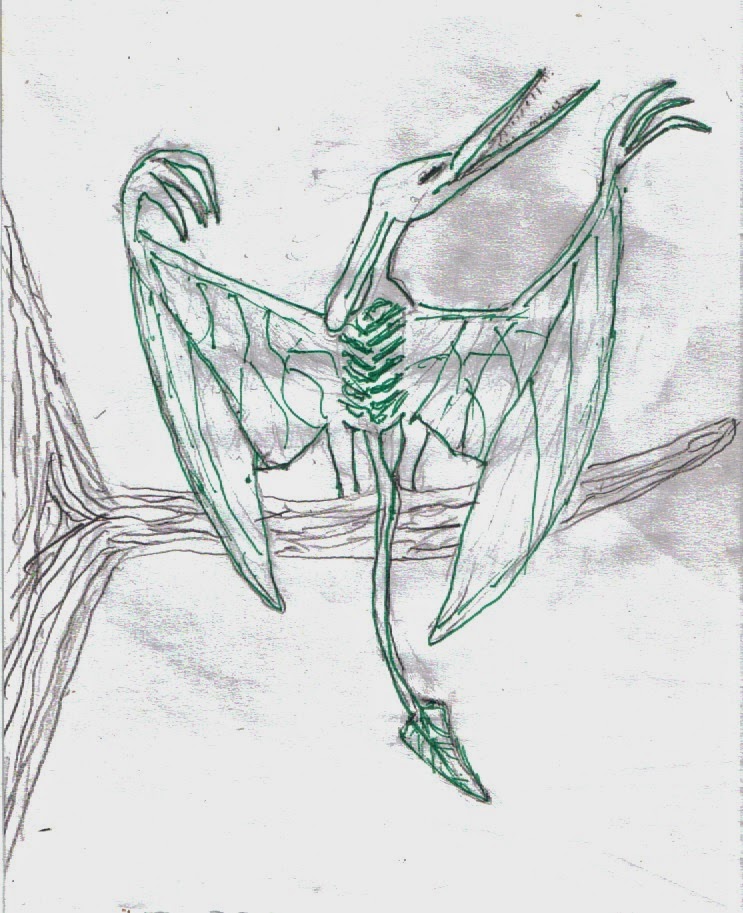 Sketch by another eyewitness: Irving, Texas

A boy encountered a long-tailed pterosaur many years ago:


This was in the 1970's . . . during good warm weather. . . . It was before middle of day. I was outside playing. I heard loud screeching sounds. I looked up and seen something flying up very high. . . . It was flying in circles. Just like a hawk or buzzard would do when they catch those
high winds migrating. . . .  It was like a large winged bird, long beak and long tail. It would turn its head some when flying.

Some months passed. I was outside around side of the house playing. This was in the evening getting dark. I seen the strangest thing flying. I thought it was a bat. But it was much bigger. It was flying fast and crazy like all over the place. I just froze to watch it fly. It was really close to me. It was hard to get a good look at when flying.

. . . this thing landed in this tree resting on a branch. It was up on other side of tree limbs. I was trying to get a look at it but not spook it. It had its back to me. I was watching it trying to figure out what it was. It stretched out its wings. That when I got a look at it. It had claw hands on top of wings. It was very scary looking. . . . It did not have any feathers.

Many eyewitness, in many areas of the world, have also reported long-tailed pterosaurs.

A few eyewitnesses, although very few, report how the tail flange is oriented. They consistently report it is parallel to the ground, at least during take-off. Those sightings were in Cuba, Georgia, and California, although the Georgia sighting did not involve observations of a take-off.


How is the Rhamphorhynchoid tail vane oriented, horizontally or vertically? According to at least a couple of key eyewitnesses, it is horizontal. Patty Carson was sure of this in the “dinosaur” or “pterodactyl” she had observed in Cuba in 1965 . . .

Tale of the Pterosaur Tail


Contrary to what some paleontologists believe, the orientation of the tail vane, in the “basal” pterosaurs, now appears to be horizontal. Two eyewitnesses, both living in California, have made this clear: Patty Carson, of Riverside; and an anonymous eyewitness living in Lakewood. Each had her own clear daylight sighting of a living pterosaur at close range.

.
Posted by Jonathan Whitcomb at 6:07 AM No comments: