How often are we exposed to the word "extinction" when dinosaurs or pterosaurs are mentioned! Extinction is declared as if it were a scientific fact. Facing into the wind of those declarations, look for yourself at the possibility that pterosaurs, in at least a few species, are still living (dinosaurs set aside for the moment).

There is no scientific evidence for universal extinction of all species of pterosaurs. Not a speck of evidence. Consider only a few eyewitness reports, then decide if you would like to investigate further, looking more deeply into those sightings and other similar sightings. I have been investigating pterosaur sightings for over ten years, and the evidence continues to accumulate, both in quantity and quality. I believe the credible eyewitnesses.

I do not set myself up to be more intelligent than the paleontologists who disagree with me. But investigating reports of living pterosaurs is outside the speciality of paleontology, and I have probably spent more hours on this obscure branch of cryptozoology than all the paleontologists in the world combined. Please, if you doubt that any species of pterosaur could be now living, at least consider the length of my experience, before dismissing this idea outright, and look at the eyewitness accounts that I have analyzed.

We could start with Duane Hodgkinson, but his report has been written about and analyzed for years, so let's just take a brief look here (see other blogs and web pages for more information). Hodgkinson was not drinking---he has never been a drinker---when he saw the giant long-tailed "pterodactyl" in a jungle clearing just west of Finschhafen, New Guinea (now the nation of Papua New Guinea). He was not alone, for his army buddy was with him. It was not an indistinct vision in the dark of night, for it was the middle of the day. It was not too brief to be sure, for the two men saw the creature take off into the air before flying away, and it flew back over that same clearing, allowing the two soldiers to get a second clear view of it. It was not far away, for they were in the same clearing as the creature that took off into the air and that clearing was less than 150 feet across. It was not a bird, for there was no sign of feathers. It was not a fruit bat, for the tail was "at least ten to fifteen feet" long. That creature was a clearly observed Rhamphorhynchoid pterosaur, notwithstanding it was a giant size and the fossils we now have of Rhamphorhynchoids are much smaller.

Consider excerpts from the second edition of my second nonfiction book, Live Pterosaurs in America [to be published within the next few weeks, probably before Thanksgiving] 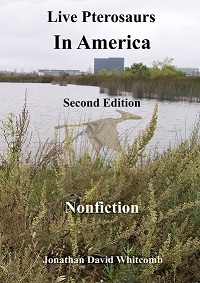 “I was 15 yrs old [when] I saw two ropens together sitting on a fence. . . . on a wood plank fence were two of the biggest bird-like creatures I could ever imagine! I almost crashed my bike! They were about 50 ft from me; the first thing I noticed was their heads . . . I would have to say it [the head] was maybe 4 ft long with the beak . . . the wings looked like black rubber. . . . their wing span was about 20 ft tip to tip . . ." [Washington state]

“Hello, my name is [RA] and I live in central N.M.. Fourteen years ago, in [Socorro], N.M., me and a close friend, who now has a masters in biology, were hiking during the midday sun at [a] box canyon and something blocked the sun for a moment. . . . “It had a 20-30 foot wingspan and was about the same length long. It had a long tail with [a] seeming spike at the end. Its head was very pterodactyl shape . . ." [New Mexico]

So consider this: When a flying creature is clearly seen to resemble a pterosaur, maybe it is a pterosaur.
Posted by Jonathan Whitcomb at 10:02 AM 3 comments: