How grateful I am for the privilige of interviewing Eskin Kuhn, by telephone, early in 2010! How delightful that he is a credible eyewitness, passing the test of responding to my surprise call and questions. His sighting was decades ago: 1971.

As a Marine, he was stationed in Guantanamo Bay, Cuba, when he happened to be looking in the right direction one hot day. He is a talented artist, with a sharp eye for grasing the details of what he sees. Here is part of his report.


I saw Two Pterosaurs . . . flying together at low altitude, perhaps 100 feet, very close . . . from where I was standing . . . I had a perfectly clear view of them. The rythym of their large wings was very graceful, slow . . . yet they were flying and not merely gliding . . . The structure and the texture of the wings appeared to be very similar to that of bats . . . the struts of the wings emanated from a "hand" as fingers would, except that a couple of the fingers were short (as for grasping) and the other ran out to the tip of the wing, others back to the trailing edge of the wing to stretch the wing membrane as a kite would. . . . they had a long tail trailing behind . . . The head was disproportionately large, with a long crest at the back, long bill, long neck with a crook in it.

Read more about the live pterosaurs seen by Eskin Kuhn

The "Giant Bat" of Papua New Guinea is not really a bat
Posted by Jonathan Whitcomb at 3:31 PM No comments: 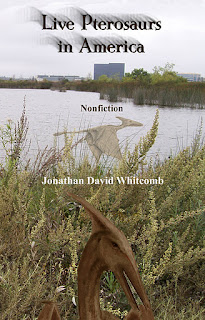 Live "pterodactyls!" In the United States of America? Prepare for a shock if you thought all pterosaurs (called "flying dinosaurs") died many millions of years ago. In California, New Mexico, Texas, Arkansas, Florida, South Carolina, Pennsylvania, Indiana, Ohio, and many other states, eyewitnesses have been shocked by featherless creatures flying overhead. Many of these living pterosaurs are much larger than any bat; Many have long tails; many have head crests (bats do not). . . . Rare and nocturnal, these strange flying creatures have always lived here, but something other than the darkness of night has hidden them. Enter now the realm of a new branch of cryptozoology, a struggling branch hampered by the dogma of universal extinction. Please consider the words of these ordinary Americans who fear ridicule but have still come forward with their extraordinary experiences: encounters with apparent living pterosaurs.
Purchase your own copy of the new second third edition of this nonfiction book on Amazon.com


Read more about this nonfiction cryptozoology book Live Pterosaurs in America
Posted by Jonathan Whitcomb at 10:27 AM No comments:

The cryptid seen in New Guinea, by Duane Hodgkinson in 1944 and by Brian Hennessy in 1971, I have named "Hodgkinson-Hennessy Ropen." Similarities between the descriptions given to me by these two eyewitnesses struck me as too much for coincidence. In each of our interviews (in different years), they both responded to my visual survey-forms, resulting in composite images of the heads of the creatures observed.

As I mentioned in my scientific paper (in The Creation Research Society Quarterly, Volume 45, Number 3, "Reports of Living Pterosaurs in the Southwest Pacific"), these different lengths of head crest I believe fall within the range of eyewitness error. In other words, the creatures observed by these two men could very well have had the same length of head crest (relative to the size of the head). In addition, I believe that in at least some species of pterosaurs, according to fossil evidence, the head crest grows faster than the rest of the head. Since the crest length is the primary difference between these two sketches, it seems likely that the species is the same for the 1944 and 1971 sightings.

Why would there ever be any question about ropen sightings being of the same species? David Woetzel wrote a scientific paper in The Creation Research Society Quarterly three years before my own paper. (My fellow ropen-seeking cryptozoologist explored Umboi Island, with Garth Guessman and Jacob Kepas, a few weeks after my 2004 expedition) Woetzel concluded that the ropen of Umboi Island is a Rhamphorhynchoid pterosaur similar to the Dimorphodon, even though two eyewitnesses that he and Guessman had interviewed chose a sketch of a Sordes Pilosus (when shown many silhouettes of pterosaurs, bats, and birds). Although I have much doubt about a Dimorphodon-interpretation of the overall reports from Umboi Island, I admit the possibility that two different species of Rhamphorhynchoids may live in Papua New Guinea. But the creatures seen by Hodgkinson and Hennessy seem very likely to have been of the same species, so I have named this cryptid "Hodgkinson-Hennessy Ropen."

Please support this investigation by purchasing a copy of the nonfiction book "Live Pterosaurs in America" (on Amazon.com, from late-2009 through early 2010, the best-selling nonfiction book on sightings of living pterosaurs).