Considering the rather low human population of the state of New Mexico, a respectable number of pterosaur sightings have been reported, and a television news show included at least one of those sightings.

“It had a 20-30 foot wingspan and was about the same length long. It had a long tail with [a] seeming spike at the end. Its head was very pterodactyl shape with a fluted back pointy head. It glided at about 700 feet . . . and [it landed] somewhere on the southern expanse of Magdalena Mountains.”

Another Eyewitness of Pterosaur in New Mexico

A report attributed to the cryptozoologist Phillip O'Donnell (whether or not he interviewed this eyewitness) involves a pterosaur in New Mexico:


"Ron Monteleone was driving near Maxwell, New Mexico, early one morning in June of 1972 . . . Suddenly he saw a twenty-five to thirty-foot pteranodon-like creature fly out a ravine.”

That "pterdanodon," if the sighting is genuine, may be the same type of pterosaur seen by an eyewitness in a Southern California desert.

How are sightings in the United States related to those in the southwest Pacific? How do some apparent nocturnal pterosaurs pertain to bats, and how are bats irrelevant? How could modern living pterosaurs have escaped scientific notice? These mysteries have slept in the dark, beyond the knowledge of almost all Americans, even beyond our wildest dreams (although the reality of some pterosaurs is a living nightmare to some bats). These mysteries have slept . . . until now.


Buy your own copy of the second edition of Live Pterosaurs in America.
A nonfiction cryptozoology book 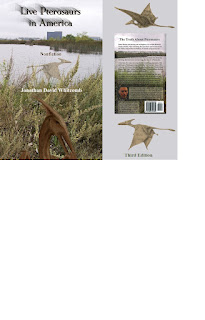