In June of 2012, from a residential neighborhood of Lakewood, California, comes a report of a "dragon" or "pterodactyl," that was seen by a 38-year-old woman in her backyard, at about noon. The reptilian flying creature was described as featherless, with a wingspan of about six feet, and with a tail about four feet long.

The tail was described as having a structure at the end, a "triangle" that reminded the eyewitness of what she would expect at the end of the tail of a "dragon." The apparent Rhamphorhynchoid tail vane was held horizontally, meaning it could be seen better from above or below the creature rather than from the side.

The woman was only about twenty feet away from the apparent ropen when she saw it, as the creature was sitting on the lowest line of a telephone cable at the back of her backyard. The featherless flyer was almost over the edge of the storm channel that runs through the neighborhood.

No wonder the possums that used to commonly run along that same phone cable have disappeared over the last 12-18 months. 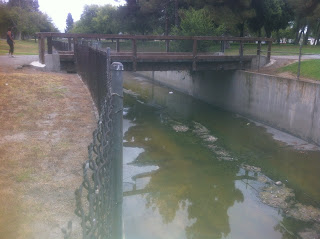 Storm channel in Long Beach, California, south of the neighborhood of the sighting

I, Jonathan Whitcomb, interviewed the anonymous eyewitness, with her husband, soon after the sighting, finding her credibility high and the possibility of a misidentification low. I believe this apparent ropen is related to the one reported five years ago near the university in Irvine, California, perhaps even the same species.

The Lakewood ropen was reported over a storm drain; the Orange County ropen was reported near a drainage system. The mouths of both systems empty into the Pacific Ocean and those channel mouths are only 17 miles apart. It's possible that ropens have come up the coast from Mexico, over the past few years, although sighting reports of "dragons" in California go back more than a hundred years.


How can living Rhamphorhynchoid (“basal”) pterosaurs fly in California, in modern times? In the United States, we have been taught since early childhood that all such creatures became extinct many millions of years ago. Rather than delve into speculations about fossils, let’s now consider eyewitness testimonies.

Posted by Jonathan Whitcomb at 6:15 AM No comments: