How fortunate I was, earlier this month, to find in a public library the Encyclopedia of Cryptozoology - A Global Guide to Hidden Animals and Their Pursuers. With a list price of $75, it seems appropriate as a library reference, and probably published for that market, for few cryptozoology readers can afford to buy it. 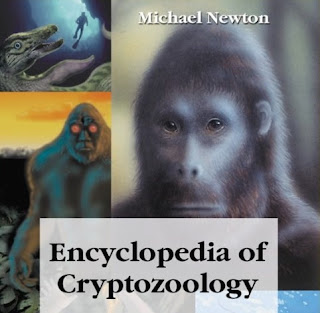 The Ropen in this Cryptozoology Book

What nonfiction cryptozoology book compares in breadth with Michael Newton's encyclopedia? Cryptozoology A to Z, by Loren Coleman and Jerome Clark, has about 100 cryptids, but Newton's has 2744 names of cryptids or entries, in a book with 648 pages. Regarding the ropen of Papua New Guinea, however, the Encyclopedia of Cryptozoology was published in January of 2005, too early to benefit from two critical ropen expeditions in 2004 and several more since then. Newton's book reflects earlier weaknesses in reporting and misunderstandings about the glowing nocturnal cryptid of Papua New Guinea.

Quote #1: [According to information given to William Gibbons] . . . "natives of the region
actually recognized two flying cryptids. The first---identified by Gibbons as the 'true' Ropen, is apparently restricted to Rambutyo (or Rambunzo), a small island off the east coast of Papua New Guinea; and to Umzoi [read 'Umboi']."

Answer #1: Gibbons was probably limited by his sources of information in the late 20th century. Many of the reports of large nocturnal flying creatures (in Papua New Guinea) whose descriptions suggest pterosaurs---those can be explained as sightings of one species or closely related type. Large flying creatures are not restricted to any particular island (or two) where many other islands are within flying distance.

Answer #2: Most eyewitnesses of these flying creatures in Papua New Guinea are natives, probably without any word for the English "reptile." Between a native's description and Gibbon's report, somebody, perhaps a missionary, may have interpreted something as suggesting a reptilian feature or features, but this may be third-hand information. Regarding "3-to-4-foot" wingspan, many sighting reports involve much larger wingspan estimates, not as likely from a different species as from older individual creatures that have had time to grow larger.

Answer #3: Some species of animals continue to grow as they mature, differing from common species of birds which have a particular maximum size; it seems that the ropen is one of those that keeps growing with age. Regarding the "Duah," there is probably no such name, in Papua New Guinea, for any flying animal; the proper name is "duwas."

Quote #4: "The Duah/Ropen reportedly boasts a 20-foot wingspan and a bony crest on its head, thus becoming a dead-ringer for Pteranodon."

Answer #4: Nothing of the kind, although I had that belief when I first started preparing for my 2004 expedition. The ropen has a long tail, very long, with a Rhamphorhynchoid-like flange at the end of that tail. The long tail with a "diamond" at the end knocks down the Pterodactyloid conjecture.


“Duah” is probably a distortion from some Westerner who heard the word “duwas” and thought of “duah” as the singular; it is not. The only real word I know (in the southwest Pacific) that is close to “duah” is the Tok Pisin word for “door.” To the best of my knowledge, there is no animal, real or unreal, that in a local PNG language is called “duah.”

Posted by Jonathan Whitcomb at 9:05 AM No comments: