On May 5, 2012, Canadian radio-television host Richard Syrett interviewed cryptozoologist Jonathan Whitcomb for an upcoming television episode of "The Conspiracy Show." 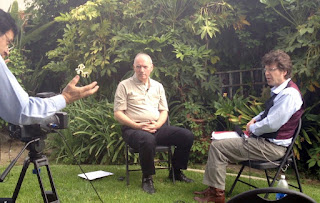 Whitcomb explained his conjecture about the source of the more mysterious of the Marfa Lights in southwest Texas. He believes that they might be similar to the ropen lights of Papua New Guinea: large nocturnal flying creatures that are bioluminescent. Whitcomb described how two lights sometimes separate in a way to indirectly attract Big Brown Bats that catch insects.

He also told Syrett a little about his interview with Gideon Koro, a native living on Umboi Island, Papua New Guinea, who encountered the giant ropen in daylight at a remote crater lake. Koro told Whitcomb that the tail of the ropen was seven meters long.

The talk show is scheduled to be aired in Canada around October.


Richard, some of those skeptics who were really shocked were actually witnesses themselves. . . . Some of those witnesses . . . are shocked at what they have seen and . . . relieved to know that there are actually others who’ve seen something similar.


Richard Syrett, host of “The Conspiracy Show” in Canada, asked me, Jonathan Whitcomb, about my opinion on proving the existence of living pterosaurs by shooting one of them. I made it clear that I oppose killing a modern pterosaur for that purpose. 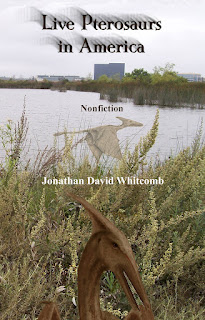 Posted by Jonathan Whitcomb at 3:41 PM No comments: