Those wonderful featherless flying creatures, sometimes called "flying dinosaurs," were actually not dinosaurs; they were pterosaurs. And, contrary to what has often been taught to Western students, not all species of flying dinosaurs (excuse, me: pterosaurs) are extinct.


" . . . flying creature in Sherman Oaks, California, suggests similarities to the ropen of Papua New Guinea. . . . at about 10:30 p.m., on September 21, 2009 . . . very large, winged creature that was gliding maybe 100 yards [above the two eyewitnesses] . . . the wingspan: ten to fifteen feet; the girlfriend estimated twenty feet. The wings appeared more like those of bats than birds, with a greater depth from leading-edge to trailing edge."


“A young man was reported to have seen something strange flying over the Maumee River in the summer of 2003.; he described it like a pterosaur, according to a recently-published book, Live Pterosaurs in America. It was reported to be chasing sparrows as it flew over the Route 49 bridge near Antwerp, Ohio.”

Posted by Jonathan Whitcomb at 5:00 PM No comments:

By living-pterosaur researcher and author Jonathan David Whitcomb
.
How many critics have assumed that eyewitnesses of living pterosaurs must be either mistaken or dishonest! How dogmatic the teachings of universal extinctions! How long we have been indoctrinated! Why have an open mind to someone who talks about seeing a living pterosaur? It is a human experience.

I have interviewed eyewitnesses from many countries, including the United States, England, the Netherlands, Sudan, the Philippines, Papua New Guinea, Australia. Many of them describe a large flying creature with a long tail; many descriptions include words like "featherless," "head crest," "diamond at the end of the tail," "huge." These people come from different cultures, different native languages, different religious beliefs; yet about 80% or more of the sightings, in any particular part of the world, include "long tail" with a description of a strange flying creature. Consider now that long tail; what does it mean?
. 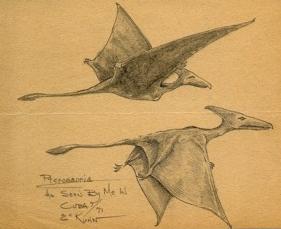 A few critics have ridiculed sighting reports as hoaxes because they have mixtures of descriptions that do not coorelate with any particular pterosaur fossil. Those critics, however, fail to take into account a number of important details. Many of the more-credible sightings (true eyewitnesses sometimes report directly to a cryptozoologist who specializes in living pterosaurs; I am one of those investigators) include the same unusual combinations: large size, long tail, head crest. Random hoaxes would not create such a consistant set of descriptions; and why should a modern pterosaur not have those characteristics? Those consistencies would not come from hoaxes; for example, in the United States, decades of movies and television have conditioned any potential hoaxer to think Pterodactyloid rather than Rhamphorhynchoid, but American eyewitnesses, like those in other countries often describe a long tail.

Misidentifications of a giant bat---that is another common criticism. But how do critics explain the long tail, often seen with a Rhamphorhynchoid flange at the end? And how do they explain the behavior of ropens at Umboi Island, Papua New Guinea? There the creature has been seen to hold itself upright on a tree trunk (not upside down like a bat), and to catch fish on the reefs, and to glow with bright bioluminescence. Some eyewitnesses of the ropen give a sure witness of a pointed head crest.

Why assume that all the eyewitnesses must be wrong, as if human experience were secondary to the dogmatic proclamations of fossil experts? Living pterosaurs, not extinct pterosaurs---those are what eyewitnesses see.
. 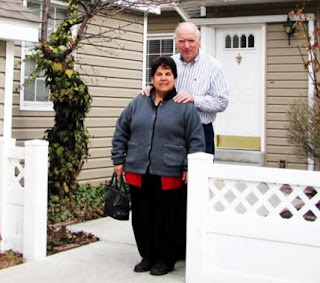 Jonathan Whitcomb with his wife, Gladys, in Murray, Utah, USA
.

Cryptozoology book on living pterosaurs in the United States (non-fiction)
Posted by Jonathan Whitcomb at 2:13 PM No comments: